Heading west on U.S. Route 20, the 21st century moniker of The Oregon Trail, from Cleveland takes you through main streets that have seen better days—they are no longer “main” and I can assure you that lurking on the outskirts of the small former farm and steel towns of Ohio are the aluminum and concrete behemoths named Wal-Mart that are occasionally dogged by the Dollar Generals that have replaced the old General Stores where farmers would go for threads, seeds and the occasional top coat. 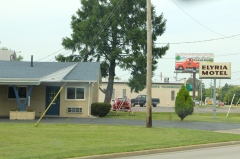 There are no hotels in the downtown areas, but along Route 20 you’ll find some classic roadside Motels, such as The Elyria Motel in Elyria, Ohio, birthplace of Sherwood Anderson, author of Winesburg, Ohio. According to the local paper, The Elyria Motel is the location of an accidental suicide, so I can’t account for how cozy or clean the place is, but like many mom-and-pop motels, finding a clean well-lighted place is getting harder to do by the day, and Super 8’s are no replacement. So the road is where you find yourself in constant haze of movement, trying to get from the somewhere you just where to the where the hell are you going ahead. And every main street bleeds into the other through the veins of  short-stalked browning corn—it’s too late for many of the crops in central Ohio, so ashes to ashes and dust to dirt for next year; the corporate-sponsored farms with their corporate logo signs waving to cars as they pass by will have to wait ’til next year, which is fine because now they can squeeze and extra dollar out of consumers for every four ears of corn. END_OF_DOCUMENT_TOKEN_TO_BE_REPLACED

I was born in 1971, and my early Christmases are best remembered as times I convinced myself each year that I could eat an entire turkey leg, or when I tore open green wrapping paper to expose Star Wars figures while listening to my entire family fight from the moment they got out of bed to the time I went to bed. Today, I view Christmas as the only time I get to see my family and the only chance I have to watch A Christmas Story on loop for 24 hours. With the exception of my kid, I am the only other person in my family who loves this movie. So it was only natural I had to go visit the house that was used for the exterior shots in the movie while I was in Cleveland.

END_OF_DOCUMENT_TOKEN_TO_BE_REPLACED

I remember when I used to work at a local paper, my friends Robyn, Nick and I would go out to grab something to drink before we started our work day. We’d stand in line, all three of us holding a different type of beverage—Robyn with hot tea, Nick with chocolate milk, and my own left hand wrapped around a cup of Wawa’s cigarette butt flavored coffee, six sugars and a cup-and-a-half of cream. The background music leaking out of the speakers in the ceiling would surround the air with some 1950’s excuse for Rock and Roll—Fabian begging to be turned loose, Bobby Rydell asking to be held tight or Fats Domino looking for his thrill.  I’d turn to robyn and Nick and say, “How did our parents ever like this?” I got my answer to this question in Cleveland. 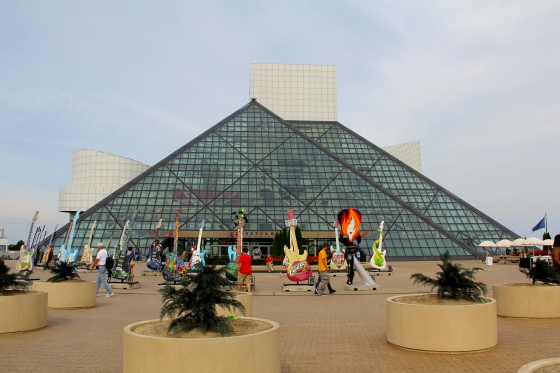 The Rock and Roll hall of Fame

END_OF_DOCUMENT_TOKEN_TO_BE_REPLACED

In downtown Cleveland, surrounded by four right angles of traffic, stands The Cuyahoga County Soldiers’ and Sailors’ Monument, or known locally as Cleveland’s Soldiers’ and Sailors’ Monument. The monument’s most notable recognition would probably come from the opening scenes of “A Christmas Story,” where little Ralphie, his brother Randy, and all their friends press their noses against the display windows of Higbee’s Department Store—in the background stands the monument ignorant of the Christmas season, blackened by years of soot and pollution from the burning furnaces of steel mills circling the city like like stationary iron and chromium buttresses.

The Cuyahoga County Soldiers’ and Sailors Monument after a recent cleaning.

Today the monument has been cleaned and invites visitors to look at her insides, walls lined with gray granite and Amherst sandstone where the names of local soldiers and sailors who fought in the Civil War are carved, with the notable exception of any Black soldiers who served (apparently there are plans to add those missing names to the stone walls as the names are discovered through research), and four interior bronze wall reliefs depicting important moments of the Civil War. Above the walls are the bronze carved images of high ranking officers. The yellow, bronze and red colored walls and their echo gives today’s visitor the feeling that he/she is in the bathroom of train station.  Albeit a clean bathroom, but this is a step back in time when the cultural symbols were different. When memorializing and the neutral color of yellow depicted remembrance. Still, around the exterior of the monument all you can smell is urine— you can see the decades of piss stains on the red sandstone. END_OF_DOCUMENT_TOKEN_TO_BE_REPLACED