Our distance today was pre-planned—287 miles from Amarillo, Texas, to Albuquerque, New Mexico.  This part of the trip started a fire under both Kyle and I to get to the west coast as quick as possible. Albuquerque’s fire also burned me.

Neither of us wanted to get to Cadillac Ranch too late—we wanted to experience the GM Tombstones the way they were meant to be seen—as a human slash through the horizon, and man’s intrusion on the earth. While there, we both made our marks—mine on the 1963 Caddy. A few miles away, by the Texas/New Mexico border, Kyle and I visited a couple of abandoned buildings, and then eventually found Tucumcari, New Mexico, a city that, at the time, was still thriving. Only four years later more than half the businesses on Rt. 66 here were closed, and not one motel filled to capacity.

It was Kyle’s need to go to the Sandia Mountains that brought us back to the highway to get to Albuquerque as quickly as possible. As soon as we checked into our motel, Kyle left to rent a motorcycle. Meanwhile, I was harassed by Native Americans, sickened by food from Carl’s Jr., and allergic to every fiber of fabric in our motel.  This would be the last time I ever stayed in a Days Inn.

My next day was worse… 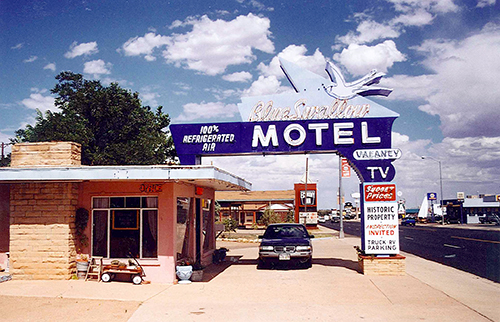 The Blue Swallow Motel in Tucumcari, New Mexico, was on the way out. But it has since been saved and received rave reviews from those who have visited. One day, I hope to stay there myself. July 16, 2001.