The sides of barns from Oklahoma to Illinois demand you visit her. Billboards beckon you for miles at a time along Route 66 and Interstates 55, 44 and 70 to explore her insides. She’s one of the first landmarks in the world to advertise her name on the backs of cars courtesy of the bumper sticker. Mermec Caverns is no mere cave—it’s origins as a shelter harken back to the Osage tribes who used her to stay warm during harsh winters or keep dry during severe storms well before Europeans came to steal, rape and rob the lands. 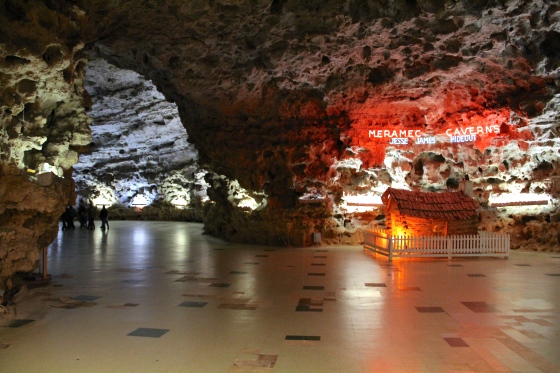 The ballroom of Meramec Caverns. Don’t let the neon and the tiled floor fool you—the tour is an impressive spectacle of the power of nature.

When French explorer Philipp Renault came to the New World, the Osage told him about a cave whose walls were lined with veins of gold. in typical colonial fashion, Renault when to the cave to claim his riches, only to find the gold veins were really saltpeter. So, O.K., it wasn’t gold, but saltpeter could just as easily be mined for it’s high demand in the use of creating gunpowder. In 1720 Renault named the place Saltpeter Cave and for over a century Saltpeter Cave was used to produce gunpowder.

During the Civil War, Union troops set up a gunpowder facility in the cave, but in 1864 they were overrun by Confederates and saltpeter mining was stopped. After the war, the cave was used for more hospitable occasions—parties were held inside during the summer months and kept the locals cool during extreme heat.

Then comes Lester Benton Dill, a spelunker and cave-lover who bought the cave in 1933, and changed the name of the cave to Meramec Caverns. After much exploring, Dill found the cave was a series of caverns much larger than what was already known by the Osage and locals—this wasn’t just a cave, but a seven-level series of caverns that allowed people to see the insides of the earth.

Since Dill opened the caves to the public in 1933, Meramec Caverns has been a travel destination for people all over the world. Dill built a theater inside and, in 1941, found an area of the caverns where Jesse James and his outlaws hid from law enforcement. It was also Dill who came up with the idea to plant billboards and paint barn signs along the roads, and slap a bumper sticker on the back of every visitor’s car.

One of many billboards and painted barns demanding you visit Meramec Caverns.

Much of Meramec Caverns’ history has been preserved, from the antique souvenir machines to the tiled ballroom floor. But what makes Meramec Caverns a MUST see are the calcium and mineral formations created naturally over thousands of years. The basic tour takes you to many levels and exposes you to a natural beauty rarely seen both of rock and of underground streams as placid as a night-time sky. Don’t let the neon and gift shop deter you from a commercial-free journey to the center of the earth.